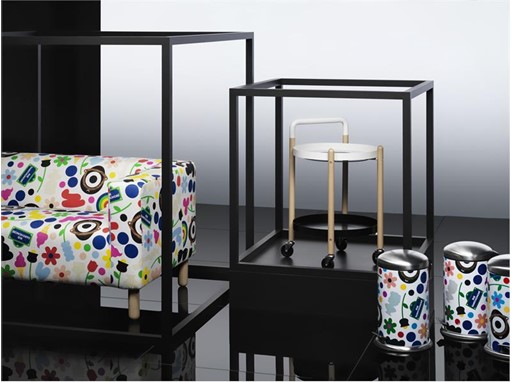 Fun and fashion infuse every item in FÖRNYAD collection – a celebration of student (and work) life that’s the result of IKEA teaming up with colette founder Sarah Andelman and Craig Redman, known for his egg-shaped alter-ego Darcel Disappoints.

FÖRNYAD may have been designed with students in mind, but age doesn’t come into it. The stationaries, note books, desk lighting, stool, pedal bin, rug, plus more that make up FÖRNYAD are for everyone who wants to add some fun to everyday life. Pattern play, unexpected colours and sizes, and a few quirky surprises get the job done. And as the name of the collection implies (FÖRNYAD=renewed), here are some new takes on old darlings like the LACK and FRAKTA, not to mention a new sofa cover for KLIPPAN.

The duo Sarah Andelman and Craig Redman have been collaborating for nearly a decade, with Sarah being founder and former Creative Director of Parisian fashion concept store colette and Craig the creator of Darcel Disappoints, a colourful character who observes city life in New York on his blog.

FÖRNYAD focuses on core elements from both, that is the colette blue and accompanying dots, and Darcel’s black egg shape and cycloptic eye.

FÖRNYAD collection will be available for a limited time starting in 2019.

About Sarah Andelman
Sarah Andelman, Creative Director “Just an Idea”. Former owner of the influential Parisian boutique colette that closed in December 2017 after 20 years in business. Sarah is a pioneer in creating lifestyle retail experiences and has collaborated with brands such as Chanel, Hermes, Nike, and Adidas.

About Craig Redman
Born in Australia, Graphic Designer Craig Redman resides in New York, US. He is the co-owner of design studio Craig & Karl, with Google, Nike, Apple, Vogue, and many more on the client list.
Darcel Disappoints, and the illustrated blog darceldisappoint.com, is Craig’s solo project sprung from his observations of city life when he first moved to New York.