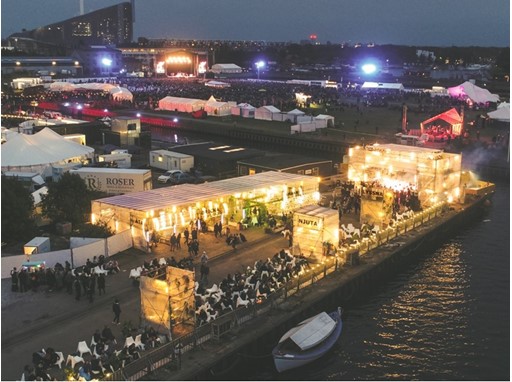 IKEA joins the HAVEN festival in Copenhagen, 10-11 August 2018, to continue the journey of exploring life outside of the home. At the IKEA area at HAVEN good music and good food go hand in hand: At this year’s festival guests can enjoy music by Swedish artists and try the new IKEA veggie hot dog. IKEA is curious to meet and interact with people in places where they enjoy themselves and socialize, because everyday life happens beyond the four walls we call a home.

Driven by the IKEA vision to create a better everyday life for the many people, IKEA is always looking for new ways of meeting people and learn about their everyday life – at home, in the neighbourhood, outside, with friends and family. And maybe some of the best moments in life happen when people come together – for example around food and music! At this year’s HAVEN festival IKEA will feature the Swedish R&B and hip hop artists Sammy & Johnny Bennett, JAQE, DJ Finest and Mack Beats in the IKEA Festival area.

“Sweden has for long been appreciated for its music and design, and both of these expressions are a universal language which can inspire people everywhere. Today more than ever, thanks to technology, geographical boundaries is not a barrier. By bringing some really good Swedish artists and letting them perform in an IKEA setting, we hope people will be inspired and join the party”, says Marcus Engman, Head of Design at IKEA Range & Supply.

To complete a great festival experience and unite people around good food and good music HAVEN festival guests will be among the first to try the new IKEA veggie hot dog, which will be launched in all IKEA stores in Europe in August.

“We are proud to be serving the veggie hot dog at HAVEN. We have worked really hard to develop a plant-based hot dog that tastes good and is also better for the planet. Serving food at a festival and interacting with people gives us a great opportunity to get inspired and hear their feedback” says Michael La Cour, Managing Director IKEA Food Services AB.

The veggie hot dog, served with spicy mustard, roasted onions and red cabbage, will be accompanied by a prototype of plant-based soft ice that IKEA Food Services is currently developing. The aim is to add the plant-based soft ice to the IKEA Bistro range as an alternative to the popular dairy-based version.

HAVEN festival combines beer, food, art and music, giving people the opportunity to discover new tastes, sounds and sights. With a shared interest of meeting people through food and music, joining HAVEN is a natural step for IKEA Food to interact with people in a new context. Previously IKEA Food participated in HAVEN in 2017 and Boston Calling in 2018.

IKEA offers well-designed, functional and affordable, high-quality home furnishing, produced with care for people and the environment. There are several companies with different owners, working under the IKEA Brand, all sharing the same vision: to create a better everyday life for the many people. IKEA was founded in Sweden in 1943.

IKEA Food Services AB, based in Malmö, Sweden, develops the global range for the IKEA Restaurants, Bistros and Swedish Food Markets in over 400 IKEA stores in 49 markets. With food at the heart of people’s everyday life, IKEA Food wants to offer a modern taste of Sweden – honest food for people and the planet.

Sammy & Johnny Bennett
After having taken the Swedish music scene by storm in 2016, Sammy & Johnny Bennett received the award for 'Best newcomer' at the Swedish Grammy Awards. Sammy & Johnny Bennett hit the Swedish rap scene like a bomb during spring 2016. The talk about the brother duo from Gothenburg spread and it didn't take long until people had joined in with the chorus of admirations, thanks to the duo's outstanding ﬂow, rhythm and vibe, since the release of the Bennett brothers' ﬁrst EP ”Hundra80” last year. The journalist and hip hop proﬁle Ametist Azordegan also emphasizes the twins' stage presence and claims that she never has seen a better live act. For 2018 the brothers opened up strong with a nominee for best hiphop at the P3 Guld Gala and also received an award for best hiphop from the Swedish musical institution Manifest. Later this year they have set to release their highly anticipated debut album which they are fully focused on.

Sihel Sinash, also known as DJ Finest, is not called "the hardest working man in showbiz" for nothing. His contribution to the culture of Gothenburg and Sweden speaks for himself - from the youth work, built by the basketball court at Heden to countless club initiatives such as Soul Kitchen, Finest Vibe, The Bridge & Crazy Sexy Cool. Finest is undoubtedly a pioneer. He started arranging events at the underground clubs of Gothenburg in the early 2000s. In 2004, the nightlife of Gothenburg had reached a peak, and Finest would like to add something that he thought was missing - a Saturday club with the very best R&B, hip hop and fun music. Club Shakedown became an instant success and is today both well-known and a loving memory of many.

During his 14-year career, Finest has been playing with artists like D'Angelo, Chaka Khan, Keri Hilson, Ginuwine, Teedra Moses, Tower Of Power, Musiq Soulchild, Joe, Xzibit and J. Cole. In 2015, he toured in Europe with the legends of funk, The Zapp Band, the first ever European tour of the band for over 25 years. With a style that includes everything from Soulful House, G-Funk, Acid Jazz, Funk, Disco, Smooth Jazz, Southern Soul, Neo Soul, R & B and Hip Hop, Finest has become one of the broadest DJs out there.

Finest is today official DJ for Parham, as well as manager of hyped Sammy & Johnny Bennett as well as Filip Hunter. There is always something new going on, Finest is doing everything from booking gigs for world artists, playing on the hottest floors, working with governmental projects and finding the next talent. Despite a constantly packed schedule, he never forgets to refine his DJ skills and strives constantly to improve his next set and scratch arsenal. Finest has also started his own radio show every other Friday on P3 under the name: "P3 with Finest"

With a tremendous passion for music and special feeling for delivery, one can expect a unique set of grooves that makes your soul feel great.

JAQE
Jaqe is one of the most enigmatical Swedish hip hop voices of the 2010s. Never stuck in a groove, never predictable. Jaqe has over the years been sparring with his releases. From his debut “232” in 2011, he has participated in a handful of releases and dropped a collaboration with Marcus Price, but still managed to leave a permanent impression on the Swedish hip hop scene with his acute lines and intense style. His capability to lift a song has made him one of the most coveted artists within hip hop in Sweden and his collaborations with among others Mack Beats and Lorentz show why Jaqe belongs in the very top segment of Swedish hip hop.

Marko "Mack Beats" Saez stepped into the limelight with the critically acclaimed and album "Centrum" (2013). Mack Beats has worked with the biggest acts in the Swedish hip hop scene with names such as Petter, Ison & Fille, Stor, Linda Pira Yasin Byn and Blizzy and has produced hits like “Luren i fickan” by Grillat & Grändy and “Stationen” by Ison & Fille. Together with guests Mack Beats has been on tour through the years and has been a warm up DJ for artists like Kendrick Lamar and Drake.