IKEA to explore life out of home at Boston Calling 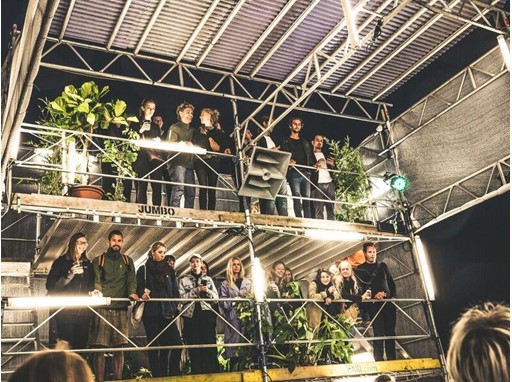 IKEA continues its journey of exploring life outside of the home. We are curious to meet and interact with people in places where they enjoy themselves and socialize. Because everyday life happens beyond the four walls of a residence and we want to learn more about that. As part of a global initiative, IKEA will therefore go to the music festival Boston Calling 25th – 27th of May.

IKEA is always looking for new ways to learn about everyday life. Throughout the years we have visited people in their homes in order to understand their needs and dreams. Now we want to meet people outside the home as well, through life visits. Because we have found that people do not necessarily associate home with a geographic place and that many leave their residence to get the feeling of home. During 2017, we participated in Design Indaba Festival, Milan Festival and Haven Festival to interact with people in a new context. Now it is time for Boston Calling, a three-day, multi-stage festival featuring live music, comedy, visual arts and food at Harvard’s Athletic Complex in Allston, MA.

“IKEA is curious about everyday life, wherever it is. Your street, your neighbourhood or your city. We´re coming to Boston Calling to learn and interact with people around things we know are core in life; music and food. But we also want to add to the experience by bringing some artists from the Swedish thriving music scene. And to offer a place to relax, hang out, enjoy some great food and charge your phone of course”, says Marcus Engman, Head of Design at IKEA.

IKEA is currently exploring music and sound and are curious to learn more as well as share some prototypes from the upcoming party collection FREKVENS, made in collaboration with teenage engineering. But there is no party without music. The IKEA Music Lab will feature R&B and hip hop artists, teenage engineering, Cherrie, Jaqe, Michel Dida and Sammy & Johnny Bennett together with the DJ's DJ Finest, TRANS94 and DJ Robin Kadir. Prototypes from the coming party collection FREKVENS will be at display to inspire and engage people to share their views around music and party. FREKVENS will launch during 2019.

Festival and food is something that goes hand in hand. At Boston Calling IKEA Food will serve food that is not only delicious but also good for both people and the planet bringing a sneak peek of the new IKEA veggie dog to the festival goers. The veggie dog will be launched at IKEA in August 2018.

“We know that food is a great way to bring people together where friends and families meet over a good meal. Besides from serving delicious food we are looking forward to interact with people and be inspired and we are especially excited to bring the new Veggie dog to the US”, says Michael La Cour, MD at IKEA Food.

At the IKEA Food Lab festival goers will be able to experience some of the tastes, textures and cooking techniques that the IKEA food designers are working on.

CHERRIE
Sherihan "Cherrie" Hersi was born in Oslo, Norway by Somalian parents who fled the country in 1990. Cherrie spent her first years in Lohja, Finland before moving to Rinkeby, Sweden. Late 2015 Cherrie released the European hood anthem "Tabanja". Tabanja which is a Turkish slang for gun (swede immigrants use a lot of slangs from all over the world) is about the growing gun violence between the youths and a call out for the governments to give the young foreign boys a chance. 2016 was a successful debut year for Cherrie when she released her highly anticipated and critically acclaimed debut album "Sherihan" (independently released) which has sold platinum and got a bunch of awards, including Swedish Grammy, P3 Radio Gold Award, Independent Manifest Award & more. The first single "Aldrig Igen (må sådär)" which featured the UK sensation grime act Stormzy has by now sold platinum and Cherrie has been praised from all sides, not least from the European audience who received Cherrie with love during her opening act tour for Stormzy all thru Europe 4 months ago. Cherrie has also played in Los Angeles (opened for Jhene Aiko) and shows in China, South Korea, UK, Norway, Finland and Denmark. Her latest track "163 För Evigt" was released October last year and was quick to become a hit in Sweden but also hit the UK market hard, even thou the track is in Swedish. The track became viral on twitter thru the somalian diaspora from all over the world. The hype reached also Buzzfeed and Fader who wrote "Please watch this swedish R&B star" and "No idea what they’re saying but it’s wavy". Cherrie has also had the likes of SZA and Rihanna to like her Instagram post about the song. That´s a long way for a third culture kid from a small hood in the Swedish suburbs.

JAQE
Jaqe is one of the most enigmatical Swedish hip hop voices of the 2010s. Never stuck in a groove, never predictable. Jaqe has over the years been sparing with his releases. From his debut “232” in 2011, he has participated in a handful of releases and dropped a collaboration with Marcus Price, but still managed to leave a permanent impression on the Swedish hip hop scene with his acute lines and intense style. His capability to lift a song has made him one of the most coveted artists within hip hop in Sweden and his collaborations with among others Mack Beats and Lorentz show why Jaqe belongs in the very top segment of Swedish hip hop.

Sammy & Johnny Bennett
After having taken the Swedish music scene by storm in 2016, Sammy & Johnny Bennett received the award for 'Best newcomer' at the Swedish Grammy Awards. Sammy & Johnny Bennett hit the Swedish rap scene like a bomb during spring 2016. The talk about the brother duo from Gothenburg spread and it didn't take long until people had joined in with the chorus of admirations, thanks to the duo's outstanding ﬂow, rhythm and vibe, since the release of the Bennett brothers' ﬁrst EP ”Hundra80” last year. The journalist and hip hop proﬁle Ametist Azordegan also emphasizes the twins' stage presence and claims that she never has seen a better live act. For 2018 the brothers opened up strong with a nominee for best hiphop at the P3 Guld Gala and also received an award for best hiphop from the Swedish musical institution Manifest. Later this year they have set to release their highly anticipated debut album which they are fully focused on.

The artist, songwriter and poet Michel Dida grew up in Bromsten in Stockholm's west end - a stone's throw away from friends Erik Lundin and Mwuana. In 2012 Dida started to tour with Adam Tensta and three years later he released his debut track "Höru Mej Bae". With a unique flow and a dark bass-driven beat, Dida reached an astrological level and the song became a viral hit. Shortly afterwards, the highly attentive "Höru Mej Bae (Remix)" feat Seinabo Sey, Mapei, Silvana Imam, Sabina Ddumba and Cherrie was released. The song has also received several Norwegian remixes of, among others, Karpe Diem, Arif, Kaveh.

Since the strong debut, Michel Dida has been touring around Scandinavia, guested Stors album "Under the Bridges" and Silvana Imam's "Naturkraft", released music together with Herbert Munkhammar, wrote the poem collection "Vi är de vackraste idioterna i världen" - and have been nominated for a of Sweden's best-dressed men 2017 by Café. The merit list is long. The hype total. Michel is currently in the studio and working on his debut album.

Sihel Sinash, also known as DJ Finest, is not called "the hardest working man in showbiz" for nothing. His contribution to the culture of Gothenburg and Sweden speaks for himself - from the youth work, built by the basketball court at Heden to countless club initiatives such as Soul Kitchen, Finest Vibe, The Bridge & Crazy Sexy Cool. Finest is undoubtedly a pioneer. He started arranging events at the underground clubs of Gothenburg in the early 2000s. In 2004, the nightlife of Gothenburg had reached a peak, and Finest would like to add something that he thought was missing - a Saturday club with the very best R&B, hip hop and fun music. Club Shakedown became an instant success and is today both well-known and a loving memory of many.

The rest is history. During his 14-year career, Finest has been playing with artists like D'Angelo, Chaka Khan, Keri Hilson, Ginuwine, Teedra Moses, Tower Of Power, Musiq Soulchild, Joe, Xzibit and J. Cole. In 2015, he toured in Europe with the legends of funk, The Zapp Band, the first ever European tour of the band for over 25 years.

With a style that includes everything from Soulful House, G-Funk, Acid Jazz, Funk, Disco, Smooth Jazz, Southern Soul, Neo Soul, R & B and Hip Hop, Finest has become one of the broadest DJs out there.

Finest is today official DJ for Parham, as well as manager of hyped Sammy & Johnny Bennett as well as Filip Hunter. There is always something new going on, Finest is doing everything from booking gigs for world artists, playing on the hottest floors, working with governmental projects and finding the next talent. Despite a constantly packed schedule, he never forgets to refine his DJ skills and strives constantly to improve his next set and scratch arsenal. Finest has also started his own radio show every other Friday on P3 under the name: "P3 with Finest"

With a tremendous passion for music and special feeling for delivery, one can expect a unique set of grooves that makes your soul feel great.

About Boston calling
Boston Calling, one of New England’s most iconic events and one of the world’s largest metropolitan music festivals, returns for its ninth edition and will take place for the second consecutive year at the Harvard Athletic Complex in Allston (65 North Harvard Street, Boston) on Memorial Day Weekend, May 25 - 27, 2018.  The internationally acclaimed and locally grown music festival will be headlined this year by Eminem, The Killers, and Jack White, and will deliver over 54 performances from musicians, bands, podcasts and comedians across its three stages and the festival’s indoor arena. Adding to the excitement, Academy Award-winning actress, producer and director Natalie Portman will curate and host a series of special programming at this year’s festival. The festival will also offer over 150 menu items to choose from this year, making it Boston Calling’s largest food & drink lineup to date.