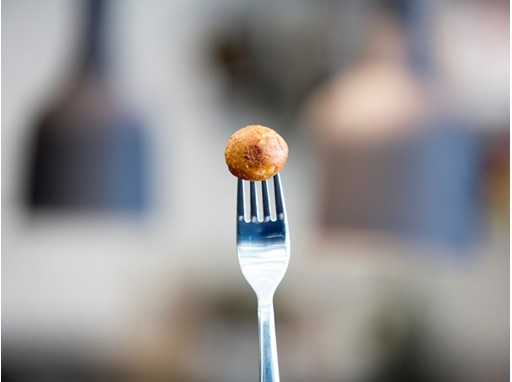 IKEA develops a new plant-based protein version of the iconic Swedish meatball, with the ambition to make it just as (or even more) famous as the meaty one. A first prototype will be offered to visitors at Democratic Design Days in June.

Until 2050 it’s estimated that the protein consumption in the world will double due to a fast-growing population. The global demand for food will increase by 70 per cent, and the protein production of today cannot meet this demand. This leads to a high demand for alternatives to meat and seafood, and IKEA wants to do its shared part to offer healthier, tasty and more sustainable food choices. The plant-based meatball is one step on this longer journey.

“At IKEA, we are constantly exploring new opportunities in creating a more sustainable future. We want to move towards more plant-based, and low impact foods served to our guests. Lower impact and plant-based ingredients are more sustainable than for instance red meat and pork”, says Michael La Cour, Managing Director at IKEA Food Services AB.

The new meatball is made by plant-based alternative proteins, and the ingredients include amongst others pea protein and pea starch, potato flakes, oats and apple. The ambition is that it should be just as tasty as the meat variant, typically served with mashed potatoes, lingonberries and cream sauce. Several tests have been carried out and prototypes have been made in close collaboration with suppliers and chefs.

“No compromises can be made when it comes to taste or texture. People eat because they like the taste and not necessarily only because it has a good cause. We want to facilitate a more sustainable lifestyle by offering delicious food that has a positive impact on both people and the planet”, says Michael La Cour.

The iconic meatball as customers know and appreciate it today, has been on the menu at IKEA since 1985, in 2015 the veggie ball and the chicken meatball were introduced, and last year the salmon and cod ball was added. So, the plant-based no-meat meatball will be the fifth member of the IKEA meatball family.

“We know that the IKEA meatballs are loved by the many and for years the meatballs have been the most popular dish in our restaurants. But we also see a growing demand from our customers to have access to more sustainable food options, and we want to meet that need”, says Michael La Cour.

Additionally, this spring IKEA released a plant-based strawberry soft ice in the European markets. The long-term ambition is to also offer plant-based soft ice, made from oats, fruits or soy, alongside the dairy-based ones in IKEA Bistros globally. By avoiding animal-based ingredients, the plant-based soft ice has only half the carbon footprint compared to the traditional dairy-based versions. Two new prototypes, oat-based chocolate soft ice and fruit-based lime-mint soft ice, will be served at the Democratic Design Days. In August last year, IKEA successfully launched a veggie hot dog that has already been sold over 7 million times and proves that plant-based food can be a delicious option for the many.

The plant-based alternative meatball will be tested on selected markets in February 2020. Sales start is planned for August 2020.

IKEA offers well-designed, functional and affordable, high-quality home furnishing, produced with care for people and the environment. There are several companies with different owners, working under the IKEA Brand, all sharing the same vision: to create a better everyday life for the many people. IKEA was founded in Sweden in 1943.

IKEA Food Services AB, based in Malmö, Sweden, develops the global range for the IKEA Restaurants, Bistros and Swedish Food Markets in over 420 IKEA stores in 52 markets. With food at the heart of people’s everyday life, IKEA Food wants to offer a modern taste of Sweden – honest food for people and the planet.