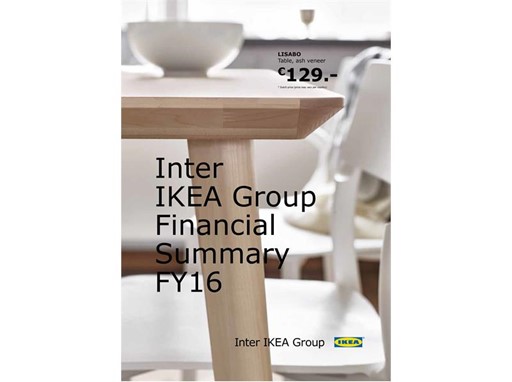 915 million times people visited the 389 IKEA stores and 44 IKEA pick-up and order points in 48 countries and the IKEA website was visited 2.1 billion times. 14 new IKEA stores opened during the year, among them the first ever in Morocco. 183,000 IKEA co-workers around the world are working together to meet customer needs and inspire more of the many people.

“To further improve the customer experience we have invested in e-commerce and new ways to make shopping, browsing and getting inspired easier. One example is that customers can order online and then pick up their products in one of the new IKEA pick-up or order points nearby. Or they can place an order in one of the stores or pick-up and order points with help from a co-worker”, says Torbjörn Lööf CEO of Inter IKEA Group.

Inter IKEA Systems B.V. is part of the new Inter IKEA Group. Today the Group publishes the Financial Summary FY16 which shows a positive business development. It also addresses the acquisition of the range, supply and production activities from INGKA Group in a EUR 5.3 billion transaction.

“We will continue to build a stronger IKEA for the future. We believe it is a good time to make this change as we have a positive development in the IKEA business worldwide. It will simplify the IKEA franchise system and create better conditions for increased customer focus and future expansion”, says Torbjörn Lööf.

To find out more about IKEA in the previous year, read IKEA Highlights FY16​
You can also receive the Inter IKEA Group Annual Report by mail to: Media.franchisor@inter-ikea.com​​.