The first IKEA Bootcamp ends with learnings for future co-creating 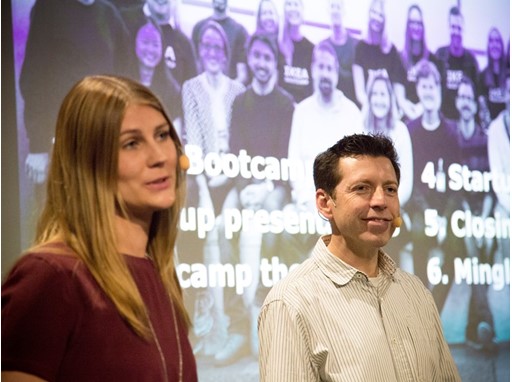 As one step in co-creating together with the world, the IKEA Bootcamp program started earlier this Fall. During the three month startup accelerator program, the ten selected startups have worked on their businesses at the IKEA global product development centre, IKEA of Sweden, located in Älmhult, Sweden. With extensive learnings from the program, IKEA is looking into how to continue develop ways of co-creating.

Together with Rainmaking Innovation, a global cooperative of entrepreneurs with experience of working with startups and running accelerator programs, IKEA started the very first IKEA Bootcamp startup accelerator program in September 2017. On December 5th, almost three months after the start, the IKEA Bootcamp 2017 has come to an end and the learnings are plentiful.

“IKEA Bootcamp 2017 is one of the first co-createIKEA initiatives and the learnings we have captured along the way will support us to continuously co-create together with the world around us to create a better everyday life for people as well as our planet”, says Per Krokstäde, New Business Projects manager at IKEA of Sweden.

The foundation for the selection process, which was done together with Rainmaking, was to find the startups that IKEA believed could help solve the challenges around being truly affordable for the many people, reaching and interacting with the many, and enabling a positive impact on the planet, people and society. Another important aspect in the selection process was that the startups share the IKEA vision and that their values fit with IKEA.

“It has been three exciting months working together with IKEA and the startups at IKEA Bootcamp. We have already seen formal collaborations between IKEA and the startups, and hope to see even more after the program. It has been great to see how the startups have learned from the IKEA way of working - one of the things they have been most impressed by is the strong values and company culture”, says Karin Blomqvist, Program Director for IKEA Bootcamp at Rainmaking Innovation.

The IKEA Bootcamp program have covered the different aspects you need to know about when starting up and running a company, and has included regular presentations and workshops performed by IKEA co-workers, the Rainmaking team, and external presenters from Rainmaking’s worldwide network of entrepreneurs. The program has also included daily interactions with IKEA co-workers and tailored mentorship from IKEA co-workers, as well as external mentors.

“The IKEA Bootcamp has been a fantastic opportunity to explore how our conductive paint and printed sensor technology could be applied to the IKEA product range while also giving us the chance to substantially accelerate the state of our business”, says Matt Johnson, CEO and co-founder of Bare Conductive, one of the ten participating startup companies in the startup accelerator program.

The goals for the program have first and foremost been to learn, support the startups on their journey, as well as potentially start collaborations. When the IKEA Bootcamp 2017 now has come to an end, IKEA will continue to follow the progress of the startups on their way forward and continue the dialogue for future opportunities for collaboration.

The Demo Day in Älmhult December 5th marked the end of the first IKEA Bootcamp and a day where the startups journeys was shared and celebrated. With the learnings from the IKEA Bootcamp 2017 at hand, IKEA will continue exploring how to co-create for the many and with the many people.

“We are always curious of new ways of innovating together, co-create, with the world around us. Our approach to innovation always has, and always will start with our vision: to create a better everyday life for the many people”, says Per Krokstäde, New Business Projects manager at IKEA of Sweden.